Through the eyes of an artist

Gerd Hanebeck (1939-2017) liked to call himself "a traveller in the mind". Africa played a very special role; a continent that he never visited, but found his way there via the Barmer Mission Museum in Wuppertal – today called, 'Museum auf der Hardt'. And about his "Aunt Lilli, a pious woman," who took him to visit the museum over and over again, and "wanted to show the little boy what the savages and pagans made for strange grotesque figures, masks and idols".

Artistically, he concentrates particularly on the cultures of West Africa, makes intensive studies of literature and builds up his extensive Africa collection. He is always concerned with the archetypal, the primordial, with forms and structures of elemental character in which the "omnipotence of a being is expressed".

Influenced by the archaic cultures, he developed his very own figurations: Gerd Hanebeck, whose art was rooted in the 1960s belonged to the first generation of artists, for whom the antithesis, abstractly / figuratively, no longer existed. His amorphous forms with their precise details have little in common with the empirically experienced and experienceable. They spring from his own creative imagination, which the viewer is called upon to "empathize, not to think for themselves." [Sources: exhibition catalogue "Hanebeck", Bramsche 1983; Exhibition catalogue "Approaches - Hans-Jürgen Hiby - Gerd Hanebeck", Wuppertal 2011]

The present offer shows 120 selected works from his Africa collection, mainly masks and sculptures, but also utilitarian objects, such as the beautifully crafted heddle pulleys from Mali and the Ivory Coast.

From the so-called "Second Art Collection of Han Coray" are seven works, including the 65 cm high, anthropomorphic monkey figure "amwin" Baule, that was published in 1968 by Paolo Morigi in 1968 in “Meisterwerke Altafrikanischer Kultur aus der Sammlung Casa Coray, Agnuzzo-Lugano“, plate 46. They all still have collection labels from Han Coray.

"Influencer of his time" - that's what Han Coray (1880-1974) would be called today. He was one of the world's first and most important collectors of African art. His collection (1916-1928,) was the first of its kind in Switzerland. In addition to Guillaume Apollinaire, Albert C. Barnes, Georges F. Keller and Charles Ratton, he recognized in the early 1900s the high artistic quality and artistic autonomy of African works, as well as their positive reception in Western art. He directed one of the first DADA exhibitions in 1917 in his Zurich gallery - there were also “Art Nègre” works exhibited.

Influencer of his time: Han Coray (1880-1974). There are seven works from his collection that Gerd Hanebeck could acquire, including the monkey figure of the Baule published in 1968 (lot 89). 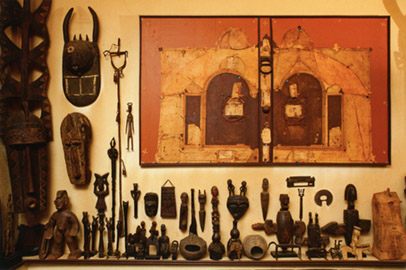