A rich and diverse selection

500 lots from the collections of renowned collectors and respected experts.

The 81st tribal art auction of Zemanek-Münster on October 31 in Wurzburg presents visually stunning and important figures and masks from Africa, Australia, Asia and Oceania from the collections of renowned collectors and respected experts.

The highlight of the Africa section is a rare commemorative figure from the late 19th century (Los 392). 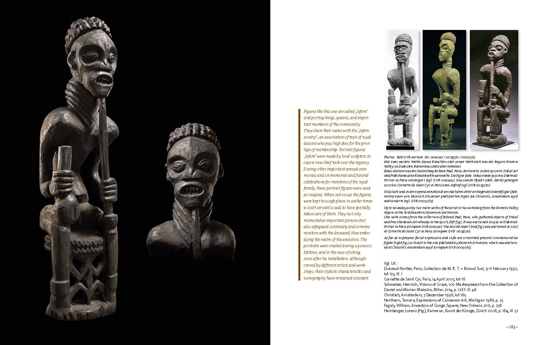 Only two other works are known from this master or his workshop from the Fontem Valley region in south-eastern Cameroon. One is from the Roland Tual collection that Dubreuil-Portier auctioned in 1930 in Paris. The second was sold at the Cornette de Saint Cyr auction in April 2007 in Paris. Stylistically similar with comparable expressive facial expressions is a Lefem figure that was auctioned at Christie's in December 1998.

Observe the wonderful posture of the figure with its’ forwardly inclined and pronounced shoulders with a strong and extremely drawn-in torso that gives the figure a remarkable dynamic and liveliness that was masterfully implemented by the carver.

The provenance history goes back to the colonial era in Cameroon. Later the figure was to be found in the collection of the German publicist Dr. Phil. Heinrich Vorwahl from Hamburg / Quackenbrueck and has remained in the possession of the family since then.

Man Ray's legendary "Bangwa Queen" from the Musée Dapper (Paris), become a photographic icon in the 1930s. Today it is seen as one of the great masterpieces of African art.

Also dating back a long time is the collection history of the 50 cm high "nkisi" power figure from the Bakongo (lot 424) with fully intact magical charges in the abdomen and back. 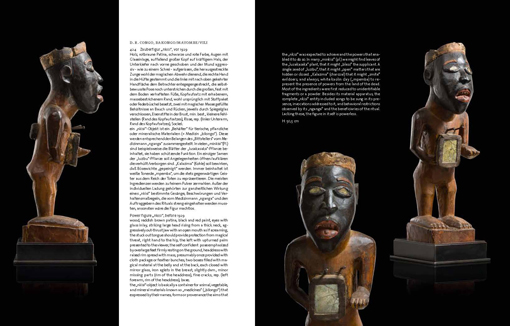 The figure is animated and full of life and seems to be pleading for an encounter with the observer. Acquired in 1929 by Wilhelm Voss (Wuppertal), it found itself in a Dutch collection in the 1930s, and later in a British collection before returning to Germany in 1987 to the collection of the painter, graphic designer and object artist Gerd Hanebeck from Wuppertal, whose entire body of work is imbued with the cultures and rites of West Africa.

Another impressive ‘nkisi’ figure is from the Songe / Tetela (lot 495). Captivatingly it has an oversized, heavyweight head whose mouth is unusually massive that blends into one unit with a triangular flattened nose. Although not complete (legs missing), it still measures 75 cm. Also clearly visible are the magical charges on the head and shoulders. 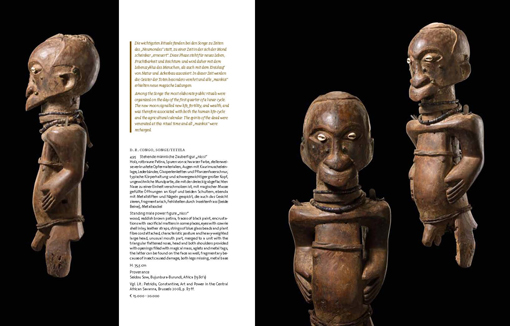 The powerful Cameroon masks (lots 376 to 391) come from the colonial collection of Anton Handl (1875-1954), who was employed as a Bavarian medical officer of Cameroonian “Schutztruppen” in Ebolowa in West Cameroon from 1903 to 1909. 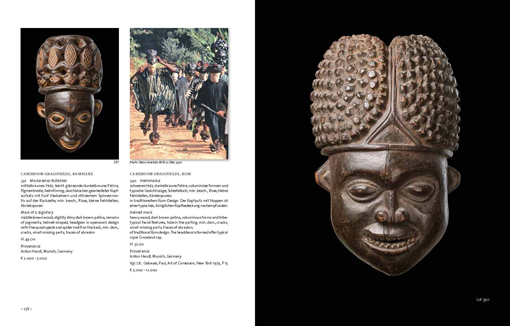 Other notable African-pieces in this auction are from Swiss private collections, formerly Emil Storrer (Zurich). 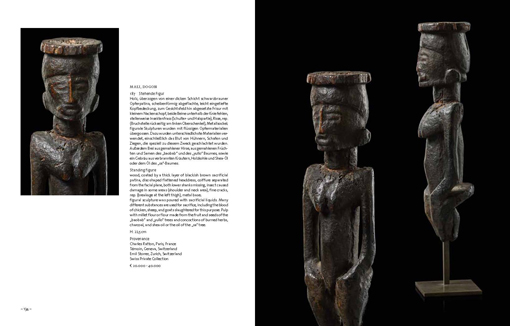 From the Dogon is a "sweating" standing figure (lot 187) (ex Charles Ratton, Paris; Témoin, Geneva; Emil Storrer, Zurich.) and a figurative lid of a ritual container (lot 186), that was exhibited in 1995 at the Rietberg Museum in Zurich, in "The Art of the Dogon" - the first main exhibition ever about Dogon art. 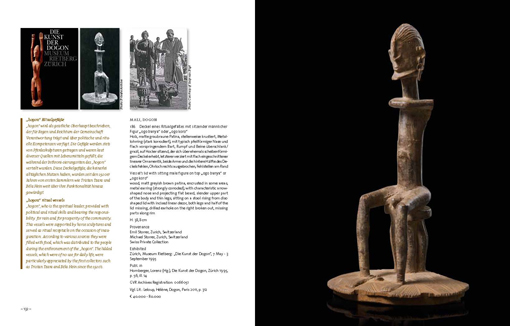 Also with a Storrer provenance are two male Baule figures (lot 211) / (lot 212), both with finely worked hair- and beards and distinctive scarification marks on the neck, abdomen and back.

There are no ritual or magical meanings for the Senufo and Guro heddle pulleys. It is though, a particularly well carved piece, created for the sheer pleasure of beautiful things. It shows an anthropomorphic head with a well preserved bobbin and cross-bar and is also from the Storrer collection in Zurich (lot 241) 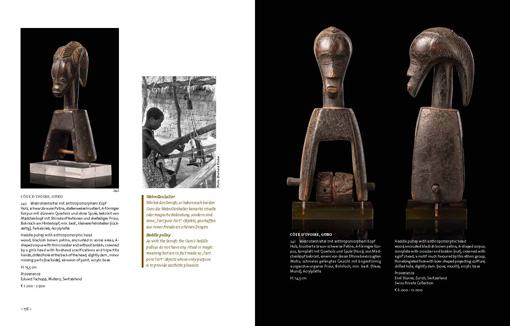 More than 500 objects are offered in the auction including numerous small figures such as ivory and brass miniatures from West Africa, Netsuke from Japan and miniature carvings of the Inuit.

“Dressed to impress: Netsuke and Japanese men’s fashion” was the title of the 2014 exhibition in the British Museum that presented over 2000 objects of its’ Netsuke collection and approximately 100 miniature ivory masterpieces from Edo, today’s Tokyo.

Originating from a German private collection are 25 traditional Netsuke (lots 22 to 40). Included are a very skilfully and diversely crafted Netsuke masks made of wood and ivory with scenes from the NÔ theatre that were very popular with the former aristocracy.

Particularly captivating are a group of small ivory figures that are only 3.2 cm high: a flute-playing boy riding on the back of a bull (lot 42). This Netsuke is from the 19th century (or earlier) and the carver provides a very precise observation of nature with meticulous attention to detail.

The appreciation of traditional Aboriginal art has experienced a renaissance in recent times. In the 1980s it achieved the rank of Fine Art, when not only the artistic quality was appreciated but also the symbolism and iconography came to the fore and with it the cultural context of each individual work.

The finest haptics and high sensitivity in the artistic implementation of the bark paintings from Western Arnhem Land. Acquired around 1960/61 in Sydney, it shows the representation of a fish in a so-called "X ray style" and is of a particularly finely drawn mythological Barramundi (lot 115), that, according to legend, was put into the fishless waters of western Arnhem Land by rainbow serpent Ngalyod and the giant Luma Luma (it has a collectors number).

A particular focus in the Australia section are the “sacred boards” or "tjuringas" - the "holy signs" of the Aborigines as well as boomerangs and spear throwers from various American, British, Australian and German collections.
The parrying shield is from an English collection, that is elaborately shaped, richly carved and also painted (lot 123).

In the Pre Columbian section we are offering 12 well-preserved ceramics from a private collection in Berlin including three painted double pourer containers from the Nazca culture in Peru (lots 160 to 162.

Samurai armors from the Edo Period

We would also like to present two magnificent Samurai armours from the Edo period (1603-1868) (lots 44, 45) that are almost encircled by the classic aggressive-powerful masks of Cross River. Visually stunning, they not only speak the same language as the archaic protective power figures Africa. Here, as well as there, social rank and power symbols are visualized. Especially high-ranking samurai attached great importance to distinctive individual features, especially with regards to the helmet. It should have a high recognition value, which is why the helmet ornamentation could be extremely imaginative, as is seen here.