wood, handwritten inventory no. "I.C.26711. Manjema - Urua - Gausser" (on the reverse of the left leg); inventory no. "26711" (on the back); old collection label of the Lindenmuseum Stuttgart still present: "I.C.26711." Central Africa. Congo. Urua-Manjema border. Gift of Captain Gausser". What is special about this figure is first of all her sex, which is emphasised by the oversized penis. For as Agthe already noted in 1983, the art of the Luba is entirely concentrated on the "portrait of the woman", who is held in very high esteem in their social system. Another striking feature is the absence of keloid scarification marks and the usual dark painting. This figure shows its natural brown wood colour. The reason for this could, of course, be that this early work was collected before it was used in the cult. A figure with comparable posture and body shapes can be found in the holdings of the Museum für Völkerkunde Leipzig (AHDRC 0029748). Another figure is published in Carl Einstein's standard work of 1920, fig. 80. Male figures from the Luba are rare. Even M.L. Felix notes of a male Luba figure he deeply admires that he does not know who or what she represents (Felix, 2018, p. 244). It is possible that the figure once formed a pair together with a female figure. Such a couple was once in the collection of Fred ten Houten (1916-1995) and is thought to have been made around 1880 (see AHDRC 0028296). 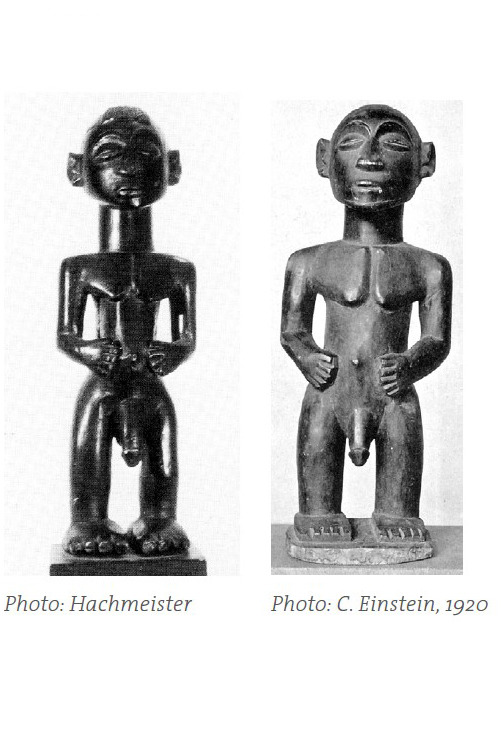