wood, pigments, small crack (handle), base Extremely fine carving of outstanding quality. The handle end of the small spoon is carved with a finely carved mask representing a ram "bla". Such elaborately decorated spoons were always owned by important and wealthy men in earlier times. A spoon with a very similar stylistic and delicacy of workmanship, which could possibly have come from the same workshop, depicted in Homberger, Zurich 1990, p. 49, fig. 23. In this canon of forms, there is a spoon from the Félix Fénéon collection, which was already collected before 1935 (AHDRC 0062299). 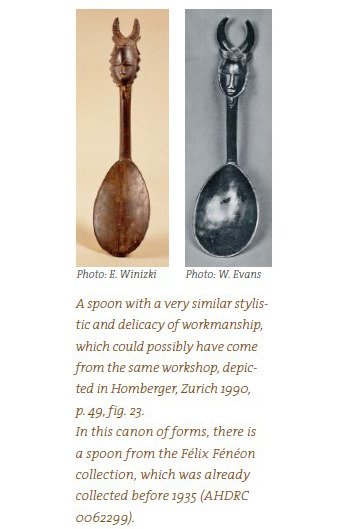